The coffee market is making a pivot towards Asia. As the economies of China, Malaysia, Indonesia, and South Korea grow, so too does their desire for quality coffee. Coffee preferences in the region are as diverse as the countries themselves, forcing producers and green coffee exporters to question where, and how, to market their beans. And while trends across the region show unity at times, it pays to know the differences between target markets.

“Made in China” newly includes “Roasted in China.” By 2020, China is expected to surpass South Korea in coffee imports and is quickly closing the gap with Japan, the fifth largest coffee importer in the world. Most coffee arriving in China — around 69% — is green unprocessed beans. That’s a massive jump of nearly 1,000% since 1995 when green bean imports to China hovered around 100,000 bags per year. As wages rise in China, demand for quality, fresh-roasted coffee has spiked. The country imported a million bags in 2015. In the past five years imports increased an average 265%, according to the International Trade Centre, totaling $520.8 million in 2017.

China is unique. Unlike nearby South Korea or Japan, China is a coffee producing nation as well as an importer. Coffee cultivation in Yunnan province is on the rise, both in quality and quantity, benefitting local roasters who wish to minimize the high cost of imports. “Yunnan grown coffee does present some cost advantages,” said Radosevich, a trader and sales team leader at Royal Coffee in China. “Much of the coffee imported into China has an 8% duty,” along with the usual expenses for international transport, making Yunnan beans an attractive option for some.

Right now Yunnan coffee generally scores below the level of quality demanded by China’s growing specialty coffee drinkers. “Most Yunnan coffee is still lower grade and exported to Europe,” said Radosevich. So where is China importing its coffee from? Vietnam. From 2009 to 2014 China imported some 49% of its coffee from Vietnam, relying on other Southeast Asian nations and Brazil to fill the gap.

While China continues to rely on Southeast Asian coffee, that could change in time. A joint operation in Jamaica called Wallenford Coffee and Mavis Bank Coffee Factory hopes to increase shipments of Jamaican Blue Mountain coffee to China, at volumes comparable to Japan. China’s rise as a coffee consuming nation is following the example set by Japan four decades earlier. A greater focus on specialty coffee is coming. Starbucks, which currently operates 3,000 stores, announced it will open 3,000 more across the country by 2022. Upstart Luckin Coffee, a local chain, already has opened 2,000 locations since launching in late 2017 with plans for 4,500 by the end of 2019.

Luckin operates tiny storefronts, takes only digital payments and delivers in 30 minutes or the coffee is free. The company is closely tied to Tencent where it heavily promotes its lower-priced offerings on WeChat. Starbucks partners with Alibaba, China’s largest e-commerce company, appealing to higher-end customers. Starbucks has more locations in Shanghai than any city in the world, including a 30,000-square-foot Reserve Roastery, its largest store in the world.

The rapid growth of specialty coffee retail outlets suggests China will one day source more of its coffee from higher quality producers in Central and South America, and Africa.

But those changes are still a long way off. According to the International Coffee Organization’s (ICO) estimate, China’s coffee market will trail Japan’s $1.4 billion for several years.  It took Japan, a tea-drinking nation, decades to become the largest coffee market in Asia.

Radosevich notes that it’s easier for specialty cafés to survive in Japan, “where there is much higher GDP per capita and so the average consumer’s disposable income is much higher. In China, only the biggest tier one cities have been able to sustain continued growth of that type of shop.”

So, while select cafés servicing cosmopolitan Shanghai or the diplomats in Beijing are already roasting Jamaican Blue Mountain and other choice beans, cheaper options from Yunnan, Vietnam, and Indonesia are likely to keep a major share of the market in coming years. 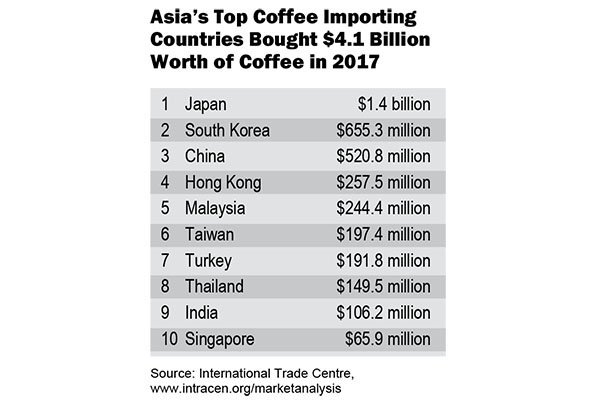 There’s no question as to Asia’s coffee king. With green bean imports surpassing 7.6 million 60kg bags annually, Japan is the world’s fifth largest coffee importer, and easily the biggest in Asia. Japanese roasters continue demanding the best, and importers ensure that’s just what they get.

Few countries have the same auction presence as Japan. Large importers like Maruyama and UCC Ueshima, along with a handful of small premium roasters, snatch up top rated batches from coffee auctions in Brazil, Colombia, and Nicaragua, furthering Japans reputation as a major buyer of South and Central America’s best beans. Japanese importers are also known for buying up 80-90% of Jamaica’s Blue Mountain coffee.

In terms of flavor, rich, fruity and citrus notes go a long way with Japanese roasters. UCC operates a coffee farm in Hawaii, hinting at Japan’s taste for the island’s exotic flavors.

Japanese roasters pay the highest prices in the world, leading everyone to question where Japan will get the best beans in the coming years of scarcity due to changing climate and political upheaval in Central America.

One option is developing a taste for Southeast Asian coffees. Victor Mah, president of the Singapore Coffee Association and ASEAN Coffee Federation pointed to a recent auction in Bali, Indonesia, where premium buyers in Japan took home large amounts of coffee. Thailand and Indonesia are both home to quality arabica growers with unique soils and climates that experts say could rival Colombia and Brazil. More importantly, these Southeast Asian producers are stepping up their marketing efforts, making it known that their arabica has the flavor and unique origins to compete globally. Japanese roasters demonstrated their enthusiasm for Asian 90+ coffee with their recent purchases. “It’s really all about marketing,” said Mah.

South Korea also consumes more quality coffee than expected, mostly thanks to high wages. In 2017, the small country imported an estimated 2.9 million 60kg bags of green beans, putting it ahead of China in imports.

South Korea’s coffee development has also closely mirrored Japan’s. But the peninsula is much further along than China in their specialty market. Consumption and prices have both risen over the past decade. According to the Korea Customs Service, South Korea’s specialty coffee market reached the $10.8 billion mark in 2017, up more than threefold in the past decade.

As with China, Vietnam is a major source of imports “due to 3 in 1 coffee for big roasting companies,” explains Sujin Park of ED&F Man, an agricultural commodities merchant servicing South Korea. Park says that coffee from Brazil is second in volume, with “African coffee growing rapidly” in the country. Brands like Haksan Co., owner of the Terarosa cafés popular across South Korea known for their specialty coffee and Instagram-worthy atmosphere, are buying big from South America. The company is making bulk purchases, focusing on mid-range beans from Brazil and El Salvador to satisfy demand in their cafés, plus the hotels and restaurants who buy from their roastery.

Competitors like Coffee Libre take a different approach, buying smaller batches of higher priced beans from Colombia and Costa Rica. Along with Momos, another renowned café and roaster in South Korea, their focus is on South and Central America, with growing interest in Africa. When STiR last spoke with the owner of Momos, he was traveling through Peru, Ecuador, Ethiopia, El Salvador, and Honduras, where his roastery works directly with growers.

Coffee Libre and China’s Valley Coffee Roasters are moving in tandem on several auction buys, both bidding on the same high-quality beans, possibly to save on shipping costs. 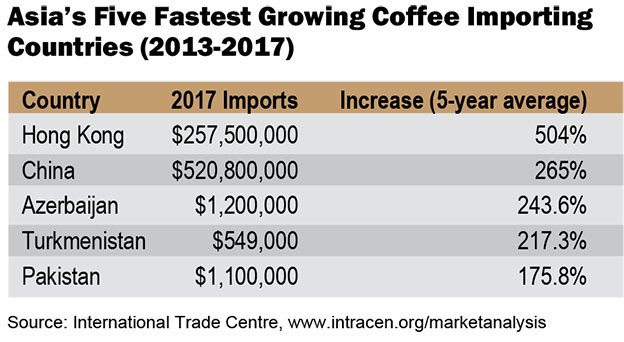 Singapore roasters are unique displaying two sides to this city’s coffee coin. On one side you have the food courts and breakfast spots — known as hawker centers — where massive amounts of robusta beans are freshly roasted in a unique Singaporean recipe: a combination of butter, sugar, and a bit of salt.

Most of the cheap robusta served at these street side food-courts is imported from neighboring countries like Vietnam and Indonesia. “Because of the proximity, those are the two main ones,” said Mah. Singapore has zero import duties on coffee, making it an attractive market for exporters.

Singapore’s other coffee scene is high-end, is buoyed by top-shelf arabica imports from Central and South America. Singapore is home to a multitude of ad executives and business moguls, along with a young class of hip baristas who lead the industry in style and flavor.

“There’ve been a lot of independent cafés opening up in what we call the heartland,” Mah says, referencing a suburban area outside Singapore’s downtown.

Being such a small country, the import market for arabica arriving in Singapore can’t compare with Japan or even South Korea. The bulk of beans are robusta offerings from SEA producers. But with Singapore keen to lead the region towards high-quality specialty brews, it’s a market that can’t be ignored.

Understanding the EastGrowth in Asia’s coffee markets means big opportunities for producers. But regional differences in income and taste mean it pays to understand the region nuances. The key to tapping local markets is an understanding of how each market differs in their preferences, as well as how they’re the same. 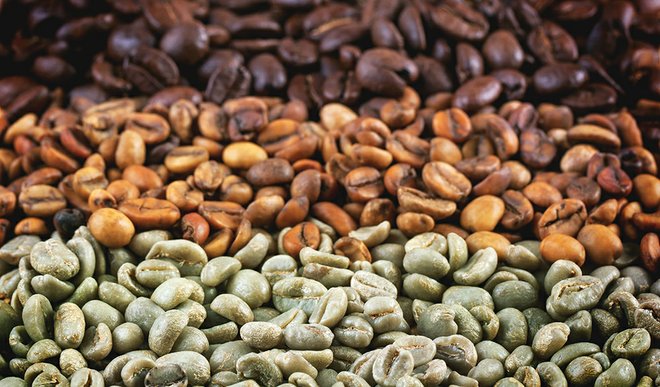